I should stop writing “Temporary” in front of my titles. It should be presupposed that all theory is always temporary.

I may have gained an understanding leading on from the previous posts on subjective and objective perspectives, on the definition of affordances and perception, relating Gibsons ecological view with traditional philosophy and cognitive psychology.

As Gibson defines perception of the environment and oneself as the same thing at the same point in time, neither a subjective nor objective perspective discriminates between what is perceived and not. Both are perceived, always, for any point of location of observation. This is true for both an objective perspective and a subjective perspective. Since both are perceived, any concept related to perception will necessarily imply this conclusion. If one assumes a non-static observation point (as we almost never have a static one, we move), then the experience of perceiving affordances are of both environment and self always coupled, non-separable, always pointing in both directions. This conclusion is then perpetuated by direct perception.

The only issue I am facing with this is that when one wants to begin defining from a philosophical perspective, one immediately wants to ground theory in realism, inviting subjective and objective perspectives, mind-dependence and independence, since, it is a way in which we can discriminate between dualism and monism for one. Coming from a strictly ecological perspective, or perhaps, Gibsonian ecological perspective, and grounding theory from ecology, one does not need these perspectives since they do not discriminate between anything, they do not show any difference when either perspective is subsumed. It should then be for this reason that Gibson confuses me when he speaks of nothing being subjective nor objective or both, because the meaning of those perspectives do not have a bearing on experience or theory, i.e. change the perspective per se. They are presumably brought in because of tradition and norm, because they are words used widely in the classic literature -and are most fitting in philosophically (Hegelian argumentally) founded perspectives like traditional cognitive psychology.

You see, it doesn’t really matter. We are not in the area of discussing the physical world. We are not concerned with matter in the ontological sense at this point (although we, as written about in several previous posts, obviously take a realist stance if forced to define things in traditional linguistics and perspectives). The reason the answer is 42, then, is because we perceive and act in the “coupled” perspective (self & environment) always. We assume affordances are retained, that the ground affords walking if we should want to walk tomorrow on that surface. But the question is misleading, because it forces upon the answerer to provide an explanation from a physical perspective. It forces one to deal with terms in a traditional cognitive language. It forces discussion on words like realism, objective, subjective, memory (for past) and imagination (for future). When I am lead to believe Gibson would rather speak of perception, movement, senses and affordances. 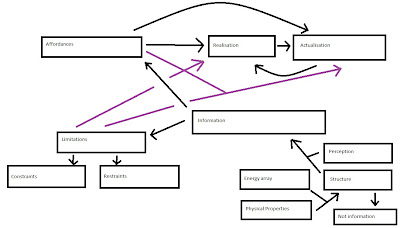 Well well, this is how far I’ve come in trying to visualise the whole tree of concepts in the modified version of rECS (Chemero), with additions from Golonka & Wilson and myself.

Structure, non-perceived, is not information.

Structure + Perception give rise to Information.

Information give rise to Affordances of the object/agent and the Limitations.

Limitations + Affordances can be Realised and/or Actualised.

Affordances can be Realised and/or Actualised (without the need of perceiving Limitations).

Affordances can be Realised which can give rise to Actualisation.

Affordances can be Actualised giving rise to Realisation.

These are not static one-way relationships, change in one, changes the others down to Perception. Practically, there should be arrows from Affordances, Realisation, Actualisation, Limitations, Information and Perception, to each other.. My MS Paint skills need a bit of retouching for that to happen. I am on my way of separating out all the concepts one by one and link them to their implicated and or necessary concepts. This is meant as a simple overview.

Watch this space as I will try and post a new blog post each day (roughly) for each concept.

I’ve been entirely engulfed by ontology, epistemology and affordances the past days. My head is about to explode. But I’ve reached a temporary conclusion. A conclusion that is generally applicable, follow most of the “traditional” ideas from ecological cog, embodied cog and rECS. They depart in some aspects, but I believe them to be necessary to live up to the philosophical demands.

Affordances, need to be, or to be grounded in, [perceived]* physical properties. The reason I have is that there is no other possible way to define it without departing from realism. Please prove me wrong, I am staring myself blind at this.

Epistemologically, affordances are perceptible through information.

Information, [any] structure of [any] energy array (brilliantly defined by Sabrina Golonka)

Epistemologically, sensory modalities discriminate between and within structures.

Perception, “the apprehension of [information] where 1) the structure is specific to an event or property in the world, 2) where the meaning of the structure (for that organism in that task) is about that event or property (i.e., a dog’s bark is about the event of a barking dog), and 3) where the meaning of the structure must be learned (or, more correctly, where an organism must learn how to coordinate action with respect to this structure).” (stolen again from Sabrina Golonka).

Epistemologically, perceiving information and coming to an understanding (need not be conscious, obviously… as if there is a black and white divide of conscious and non-conscious…) of some/all/the situationally relevant agent/objects’ affordances.

Epistemologically, bodily movement between and/or within agents/objects affordances and can be either compatible (by the agent(s) affordances or by extension, like using a stick or something) or not (like lifting the earth, the earth does not lend itself to be lift-able).

Constraints, boundaries of realisation and actualisation.

Epistemologically, restrict compatibility of affordances between and/or within agent(s)/object(s). The knee does not afford the leg to bend backwards. A local constraint that has consequences for bodily movement in the global environment. Being dynamically coupled to environment/objects/other agents, constraints vary depending on the current situationally available affordances.

This blog is written by Patric Nordbeck, currently a doctoral candidate at University of Cincinnati. About to start searching for real person jobs.

If you'd like to see some of the science I've created, please go to my homepage, or contact me on nordbepc at mail dot uc dot edu.

You can also find me here: